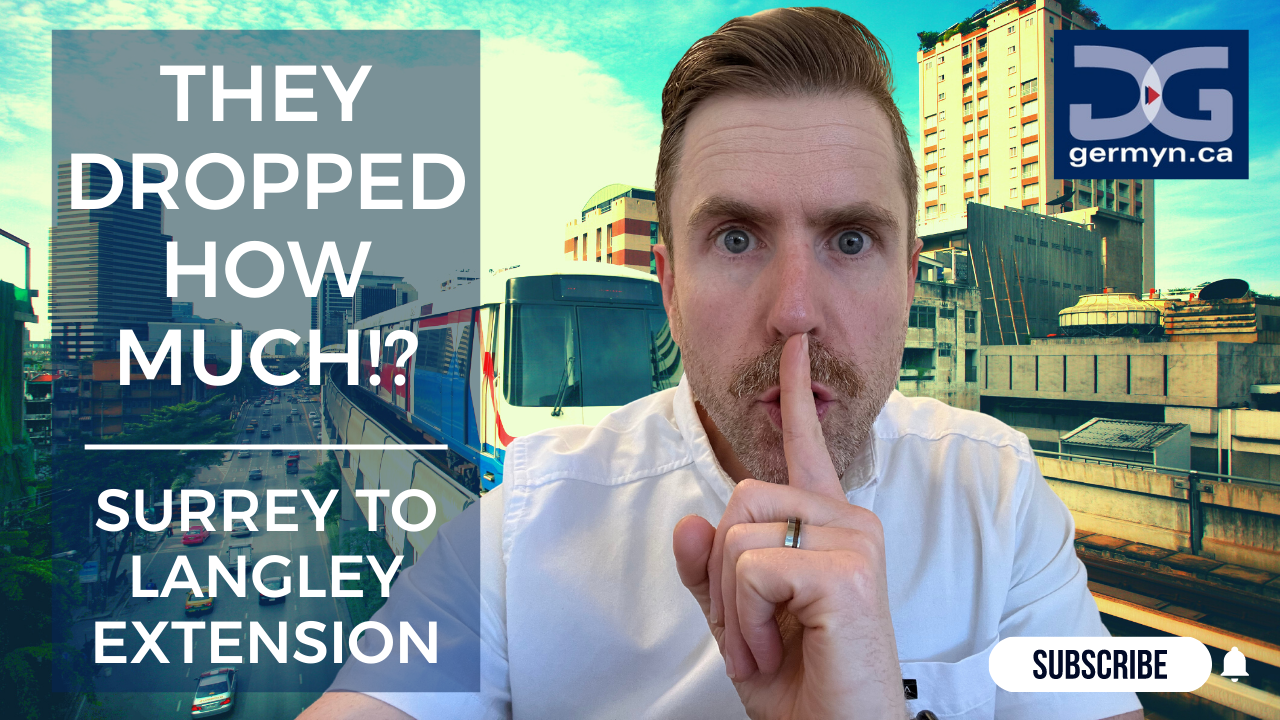 So it's happening, or so they say. We've been hearing this for a while, so I guess we'll see. The Surrey to Langley Skytrain extension has been approved, and not only did they approve it, they actually moved up the time frame to deliver it from 2030 to 2028. And whether you care or not, they're going to do it for $500 million less than what they originally thought. This is absolutely incredible.

Today's post is all about the new skytrain Langley extension. If you want to learn more about it and how that's going to impact real estate in the area, this is definitely the post for you. Let's jump into it. What's good, everybody? It's Darin Germyn from the Germyn Group, where we know you've only got one chance to either buy or sell your next home. So we're here to help you get it right.

So the BC government finally approved it. It is happening. I am excited because it's one of those things that we've been waiting for for a long, long time that keeps getting talked about, but there was never any action on it. But it is on the way, which is wicked awesome. The BC government is going to fund approximately 60% of this almost $4 billion project with the remainder of the money, a big portion coming from the federal government, and then about $230 million coming from the local municipalities that are affected by this extension. The original plan was supposed to happen in two phases, and part one of the plan was supposed to be done by 2025. So the bad news is those people kind of got screwed a little bit because that's not the case anymore.

They're going to build the entire project in one kind of foul swoop, but that's where the massive cost savings have come from and we'll get the project done by 2028. So it may be a good thing. In case you didn't know, the sky train is going to run from the Surrey central area. It's going to go down King George Boulevard and it's going to rip straight down Fraser Highway all the way to Langley Center and right by the Willowbrook Mall area. So you're going to want to avoid driving on Fraser Highway for probably about the next five years, unfortunately, because it's going to be crazy busy with construction and stuff like that.

But that is the route that this station will take, but that is the route that they are going to roll this out through. And this is where a lot of the stations are going to be. And it's really going to primarily affect the Cloverdale area, the Fleetwood neighborhood, and obviously downtown Langley. You will be able to zip from Langley to downtown Surrey in about 22 minutes on this new line. And that is pretty awesome because not only can you get to downtown Surrey, but this is going to connect everybody in Langley and around the Surrey area to all the stuff that you can now go to through Vancouver.

You could jump on the SkyTrain to Coquitlam, you can go to Richmond, or you could get to Vancouver. You can get anywhere and it's going to be so much easier, which is awesome. So this is only going to help these communities grow and prosper. Better yet, the BC government also agreed to spend about $60 million improving the neighborhoods in and around where the skytrain stations are going to be. So you're going to see a lot of beautification and growth in these areas and you're probably going to see a lot of density growth as well.

So this might be good or it might be bad, depending on how you feel about that if you live near that neighborhood. So what does this do for property values in the areas? Well, a SkyTrain line, there was a really great report done by the Real Estate Investment Network and they studied rapid transit all across the world in major metropolitan areas. Like an example would be the BART system in San Francisco if you ever been down there. And they had figured out that there's lots of benefits to when these come in.

And there's also, of course, detriment. But they figured out this kind of sweet spot between 500 to 800 meters of a rapid transit station typically is going to see the biggest and most improved growth if you're too close to the station. That actually had a negative effect, though, because you think if I look out my window and the walk by traffic just increases by multiples, well, maybe that's not a good thing because with that also comes not only the walk in traffic, but you tend to get some crime, litter, all that kind of stuff as well. But generally these areas that are very close to these transit stops are going to see really awesome investment growth in their property values. This is based on what the Real Estate Investment Network claims from doing their study, but these areas saw faster price appreciation than areas that were kind of outside of the little bubble or anybody that could reasonably access this rapid transit system.

To access the full map of where the line is going to run and where the stops are going to be, you can actually see it on the BC government's website and we will link that below. But I am so curious, what do you guys think about how this is going to impact the communities of Fleetwood, Cloverdale, downtown Langley? Is it a good thing, bad thing? Are you excited about it? I don't know how I feel about all that construction being super close to my house because it's going to be pretty busy, pretty loud and pretty congested for a little while, but the payoff certainly is going to be worth it in the end.

Leave your comment below. Let me know what you think and what your thoughts are about this new extension coming to Surrey and Langley for the sky train. If you're someone that lives near the sky train station or generally anybody that lives in the Surrey or surrounding area and you are interested in selling your home or buying your home. There is a link below to my calendar where you can book a time to speak directly with me and we'll let you know everything that you need to know to be successful in your real estate endeavors.

I want to thank you for reading, guys again. I'm Darin Germyn with the Germyn Group, where we know you've only got one chance to either buy or sell your next home. It's we're here to help you get it right. We'll see you on the next one. Bye.