At the turn of the 20th century, White Rock was Surrey’s child prodigy. The tiny seaside settlement at the southwest corner of a sprawling young municipality was hardly big enough for urban ambitions, but the promise of its beaches and balmy climate was obvious.

Homesteaders reached Surrey’s seafront area near the international boundary as early as 1890, but settlement was slow until the Great Northern Railway line was rerouted to follow the Semiahmoo Bay shoreline in 1909.

And the attributes of this paradise had not gone unnoticed; the days where the white rock was simply a landmark, signifying home to a handful of people trying to eke out a living from the sea or the forest, were fast ending. 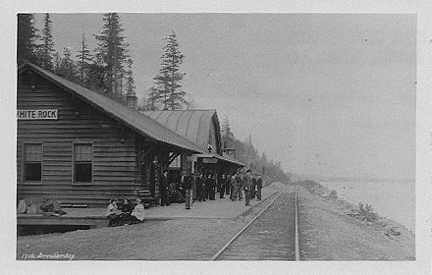 It was Canada Customs policy to have ports of entry at least one mile from the border. It was therefore Canada Customs who determined the exact location of the future community when they located their office at White Rock. The tiny railway station and customs office became the centre of gravity for a new community.

Speculators anticipated the influx that would come with convenient railway access. Among them was Henry Thrift, a bustling Hazelmere farmer who had a finger in most Surrey pies. In 1910, Thrift built his home, Bella Vista, on the White Rock hillside facing the sea and subdivided his surrounding holdings. Buildings soon lined the rails along the beachfront, as close to the train depot as possible. Summer cottages dotted the hillside.

In 1910 the original White Rock townsite, where streets are at a different angle, defying the lower mainland grid system, was marketed by a New Westminster real estate firm. Other well known names, among them Harry Vidal and David Hughes, joined the fray and real estate boomed. By 1912, with three newspapers and bread delivered daily, White Rock hardly suffered pioneer conditions.

The Campbell River Lumber Company’s mill on the Semiahmoo Reserve opened in 1913 and employed 250 men at its peak, supporting a permanent population. An impressive new school rose the next year. In the summer of 1914, construction began on the government pier intended as a commercial fishing and deep-sea port. White Rock was on its way to becoming a significant commercial centre. Or was it?

Progress stalled when the First World War broke out. Despite its whirlwind start, for decades the summer influx of out-of-towners would outnumber the year-round residents.

White Rock’s only significant employer, the Campbell River Lumber company, closed in 1927. As the Great Depression of the 1930s took hold the town declined into a sleepy, rather seedy seaside resort. Times were such that a local realtor traded 40 acres for a dog. A lot donated by Henry Thrift garnered less than $40 in a charity raffle. During those years a bright spot was the eagerly awaited day that the Lady Alexandra docked at the pier to whisk passengers away for the annual Surrey picnic excursion. In the fall, prairie folk escaped the bitter cold, migrating to White Rock to rent summer cottages for the winter.

For not even the world-shattering events of war and economic catastrophe could defeat White Rock’s idyllic summer life. Crabs cooked on the beach sold at three for a quarter. Hockey legend Cyclone Taylor took on all comers at the wooden floored tennis court next to the station. Music from dance bands wafted over the water at night.

Rivalry between city and local youngsters reached fever pitch at the swimming gala staged at the end of the season. But mothers relaxed, knowing that their children frolicked on the safest beach on the Pacific coast. If the beach was not entertainment enough, trains brought daily excitement in the form of interesting passengers – even movie stars – and the wonders of the circus train.

White Rock’s lifeblood flowed along the rails and the station was the community’s heart. Four trains a day rolled into town from either direction. Introduced in 1911, the three-car Campers Special ran between Vancouver and Blaine from July to October. That service ended in 1925, despite protests. In 1950, the streamlined International service was picking up passengers three times a day on its way between Seattle and Vancouver. Rail service to White Rock dwindled, then ceased in 1975.

After the Second World War, settlement climbed uphill, away from the beach. Returning veterans, barometers of the community’s progress, made their presence known through post-war housing on the hilltop and a waiting list for telephones. Two young doctors fresh from the RCAF set up practice in White Rock, in the Ocean Beach Hotel

Local folk were appalled when the iconic white rock was painted black one March night in 1950. Before too long a new, conscious sophistication manifested itself in a more urban lifestyle. Newly formed service clubs joined established groups to seek a universal goal, a hospital, achieved in 1954. Strong public opposition to a proposed airport halted the project, preserving the unique urban forest now standing on the fringe of the city. Upgraded highways allowed efficient travel for workers and students; White Rock became “a bedroom suburb.”

But as far back as 1912, when White Rock was fast becoming Surrey’s foremost town centre, frustration had united the pioneers in their desire for civic amenities. It wasn’t long before the White Rock Ratepayers Association considered the option of secession from Surrey. Various separation schemes were raised and debated until Bill 68 asserted White Rock’s independent status. Roughly within the boundaries of Surrey’s former Ward 7, White Rock officially became a city on April 15, 1957 – but the fun had just begun.

After a year of negotiation, White Rock’s fire hall still stood just across the border in South Surrey and the new city had no administrative buildings, let alone a town hall. That distinction had to wait until 1963.

Much needed reconstruction of White Rock’s pier in 1977 foreshadowed a waterfront revival during the 1980s. This was the era of the world renowned Canadian Open Sandcastle Competition held from 1979 to 1987 which drew hundreds of thousands to White Rock’s beaches. Marine Drive slowly began to regain its former stature on the way to becoming the showcase it is today.

Though long retired from its original function, White Rock’s constant landmark has been the train station, built in 1912. Its metamorphosis began in 1975 when the building was ceded to the city. Befitting its historic status, the depot became home to the White Rock Museum and Archives. Local railway history is one of the Museum’s core themes, represented in the original ticket office, which has been restored to its 1954 appearance.

White Rock’s success defies definition. Of its two most representative man-made symbols, the pier never achieved its intended purpose, and trains no longer stop at the station. Yet both structures are star attractions for those who still flock to the beach in droves every summer.

Have questions regarding the value of your home? Call the neighbourhood expert first!

The data relating to real estate on this website comes in part from the MLS® Reciprocity program of either the Real Estate Board of Greater Vancouver (REBGV), the Fraser Valley Real Estate Board (FVREB) or the Chilliwack and District Real Estate Board (CADREB). Real estate listings held by participating real estate firms are marked with the MLS® logo and detailed information about the listing includes the name of the listing agent. This representation is based in whole or part on data generated by either the REBGV, the FVREB or the CADREB which assumes no responsibility for its accuracy. The materials contained on this page may not be reproduced without the express written consent of either the REBGV, the FVREB or the CADREB.